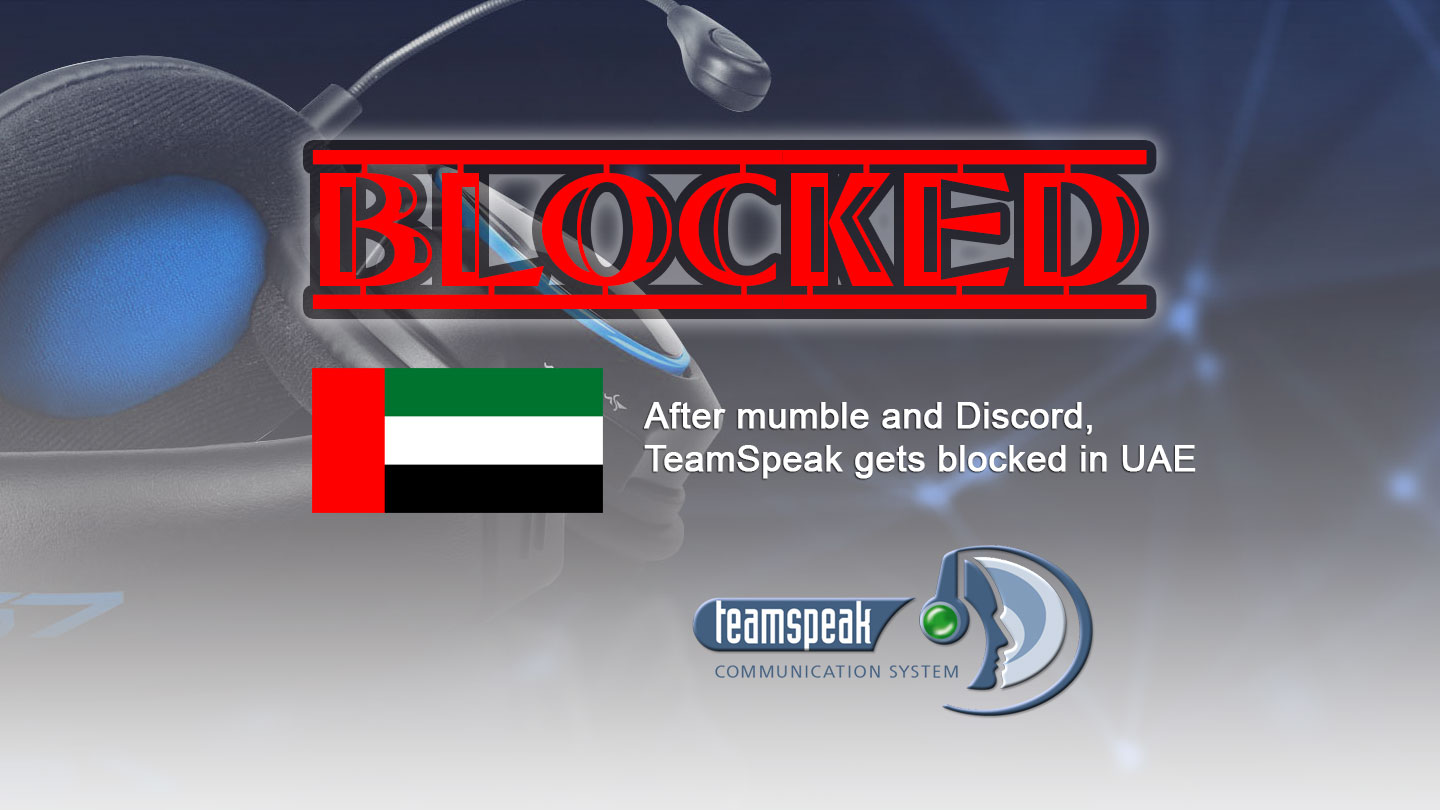 While teams like Risky Gaming continues to bring glory to the esports community in UAE, VOIP applications continues to get blocked giving hard time for this young community of gamers from UAE. Sudden news of VoIP software TeamSpeak being banned recently leaked all over the internet. This has shaken the steady ground of gamers in the United Arab Emirates. Something as basic and integral to the gaming audience such as TeamSpeak getting banned has definitely not gone down well with its millions of users. TeamSpeak has been an effective platform for communication with gamers as their target audience who use the software to communicate with fellow team players. Multiplayer games are widely popular in eSports and TeamSpeak has become an indispensable tool.

Etisalat, the UAE based telecommunications services provider, named the most powerful company in the UAE by Forbes Middle East in 2012 have said they are complying with TRA’s regulations which includes the banning of voice communication as well.

This news is hot on the heels of the recent ban of Discord and Mumble that were also unprecedented and uninformed decisions taken by the TRA in UAE.

Social media reactions are on fire to say the least. Gamers are repeatedly questioning the motive behind the banning of communicative platforms. TeamSpeak and Discord have so far been the first choice of gaming teams in UAE and this recent ban is being seen as a move towards the stone age for such an advanced region. Alternative solutions that provide the same service as TeamSpeak have not been provided which has further fazed devout gamers. “Dunk Etisalat” is turning out to be the mood of the day for the UAE gamers. Players across the country have taken to social media platforms such as Twitter, etc to voice their concern and opinion along with reaching out to TRA authorities that have the final say in this but no concrete outcome has been observed so far.

Drag2Death, the biggest TeamSpeak community in the Asia Pacific region is supporting the gamer community in India and the SEA region with its licensed TeamSpeak server where India’s top gaming teams can be found using the free community service that Drag2Death provides. TeamSpeak is Drag2Death’s community sponsor and Drag2Death recognizes the need for a dynamic platform such as TeamSpeak. Communication hubs become the backbone of the gaming cosmos and Drag2Death gives credence to these channels.

Drag2Death reached out to Abdallah El Ghafari, the X captain of UAE’s top most gaming team, Risky Gaming, to get the insider perspective on this shocking situation. Ghafari has reiterated the mass opinions of all gamers about how the pro gaming scene has been negatively affected. These apps have been used for years by players as means of communication, both locally and internationally in eSports. No reasoning has been given behind this ban and it is rumored that a new communication app that will be the default app locally and internationally will be released. However, authorities have given no conformation as of now.

“It’s safe to say, it caused the eSport community in UAE to rage and protests have been seen in social media and I hope Etisalat manages to revert this decision or introduce something useful for the players to use”, Ghafari said sounding hopeful for the future.

The gaming community has been thrown off guard and frantically looking for solutions to continue to game and excel in eSports. The eSports community seeks to unite players from all over the world proving that communication is key in developing a worldwide community. Banning of TeamSpeak is not the futuristic approach towards unification and larger participation of gamers all over the world and we hope that due recognition of this occurrence takes place in the near future.

Drag2Death is the largest TeamSpeak community in the whole region with matured TeamSpeak users.